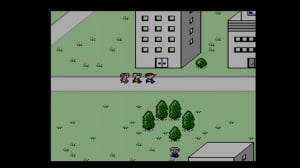 This review originally went live in 2015, and we're updating and republishing it to mark the arrival of EarthBound Beginnings in the Nintendo Switch Online NES library.

If you were an early adopter of EarthBound fanaticism in the West, you likely caught wind of a previous title made for the Famicom. Translated into English and perfectly playable, it oddly never made it to retail release on the NES. And yet, like from some urban legend, a group of fans managed to buy a beta cartridge of the RPG off eBay in 1998 and released the ROM onto the Internet as "EarthBound Zero."

It's pretty surreal, yet the fact the game took so long to officially appear on an honest-to-goodness western Nintendo console somehow feels even more so.

Earth Bound Beginnings is the localized version of the original mom for the Famicom. Its official Virtual Console appearance on Wii U eShop back in 2015 marked a victory for EarthBound lovers who had maintained a persistent current of petitioning and support for many years, but it's also somewhat of an anachronism. Given the order most have played these titles, Beginnings can feel like a loving demake of the SNES game at times, as much as the parent it truly is. 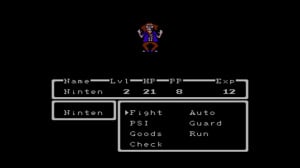 Similarities between Beginnings and the SNES EarthBound are many, with a number of concepts and themes transferred from the first to the second. There's the psychic, bat-wielding boy and his three companions, the consumption of burgers and other foods to restore HP, the collecting of a melody, and an alien threat. The overall plots are different, but both are interesting and even surprisingly emotional at times, joined to the same quirky heart of creator Shigesato Itoi.

That's not to say the playing experiences of both are an exact match, however. Beginnings plainly shows its colors as an '80s era RPG, with its sequel refining or improving upon many of its elements. Patience is absolutely necessary to make progress in this game. There's little to no hand-holding, and enemies are quite capable of taking your character out as soon as he takes the first steps out of his idyllic rural home. Dying will be common while grinding up to better levels and equipment, but the system doesn't punish defeat too severely as long as money is kept stored in a handy ATM instead of on your person. New party members will also have to be babies while they gain their footing in levels. 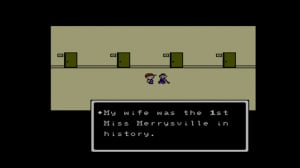 Interactions are made through the menu system, and unfortunately there's no one-hit shortcut for actions or communicating as there is in EarthBound. At least there is one-press access to the status screen and map, which is nice, and this western version includes a "run" option by holding down the 'B' button. It actually just increases the speed of the entire game, but it works.

The translation of Beginnings is more than serviceable, but feels flatter compared to the spirited localization of EarthBound. Certain other aesthetic and cultural changes were made for the West: the crows still don't smoke cigarettes.

The contemporary world is colorful and presented well for the NES era, although veterans of the series will know by now not to expect any action during battles. Static enemy portraits are all you get, but it's an intriguing gallery of often cute and/or bizarre rogues to discover. By now it's a big part of the charm the games are known for, but won't win over anyone who'd rather see animation. 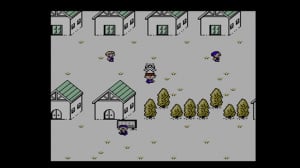 The soundtrack — a cooperative composition by Hirokazu Tanaka and Keiichi Suzuki — really brings the best out of 8-bit audio technology, offering up songs ranging from catchy and bubbly to mysterious and atmospheric. It stands the test of time, although the bizarre Magicant theme might get grating after a while based on the time that tends to be spent grinding through it (especially true if you're familiar with the beautified remix in Super Smash Bros.).

It feels like parts of this review might read more like a documentary, but much of the significance of EarthBound Beginnings — of Mother — lies in its spirit and the influence of such on subsequent games. EarthBound is absolutely the overall better title available to folks right now, and those who have yet to play either should definitely start with that. If you do enjoy EarthBound, however, then Beginnings is well worth investigating, especially given mod-cons such as save states and rewinding which help take the rough edges off a formative but less refined game. Sticking through its older style of play, with its difficulty and occasional fluctuations in balance, will yield a fine story and a strangely transcendental sense of nostalgia, like a letter of love written to a child who hadn't even been born yet.