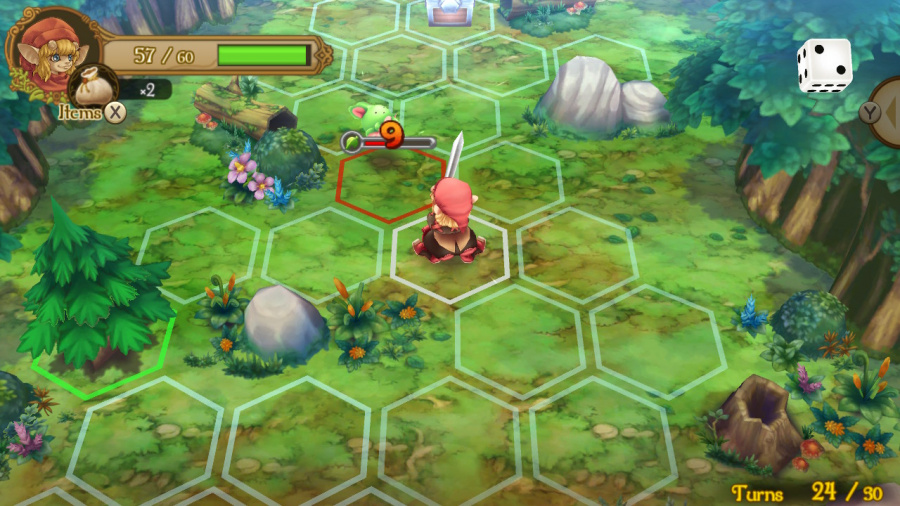 Dedicated Nintendo fans may be familiar with the studio Brownie Brown, which was started by ex-Square staff members with credits on the mana series and has titles like Fantasy Life and Mother 3 to its name. In 2013, Nintendo restructured Brownie Brown into a support studio, which led to its founder Shinichi Kameoka exiting and starting his own studio called, wait for it… Brownies. One of the first projects Brownies produced after its formation was a mobile game called Egglia: Legend of the Redcap, which has now seen a re-release on dedicated gaming platforms as Egglia Rebirth. Stripped of its microtransactions and redesigned for consoles, is Egglia still worth cracking open? Yeah, we'd say it is.

The narrative of Egglia remains simple yet ending, as it creates a welcoming and friendly world that you can't help but connect with. You play the role of a redcap goblin—feared by all you meet due to the reputation redcaps have for being incredibly violent. Your character, however, is an amnesiac with his horns chopped off and doesn't act like such a mean guy, so you soon pull together a small group of allies and begin building a town from which to rebuild the world. Legend of Mana's influence on the story of Egglia is most immediately apparent in this aspect, as your quest revolves around you collecting and opening eggs that contain small parts of the world which have mysteriously disappeared. 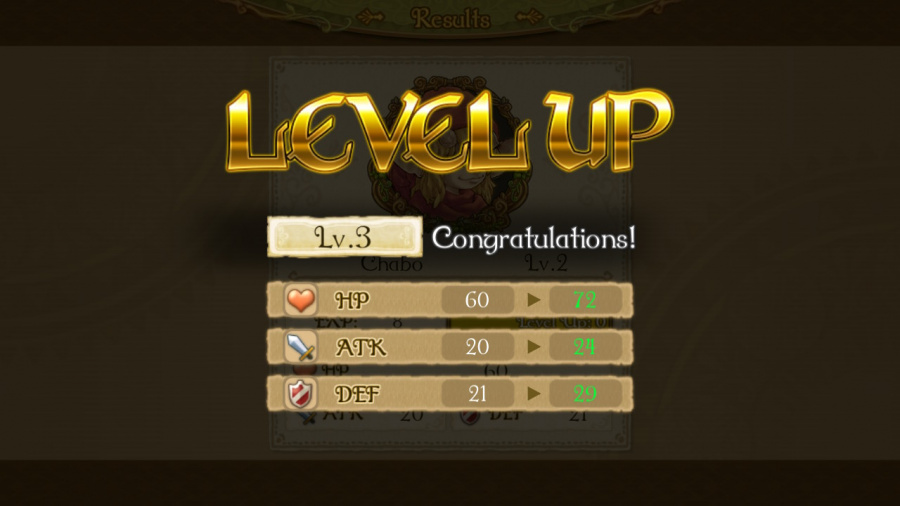 Generally, the story unfolds in a gradual, chapter-based manner in which you enter a new section of the world, help out a local character there or otherwise run through some small side story, then collect a new egg at the end and repeat the cycles. It's not terribly gripping stuff, but it is charming, and this is largely due to the lighthearted characters you come across. Whether it's an adorable fairy with remarkable anger issues or a set of twins hellbent on world domination through capitalism, the goofy cast of characters you interact with keep things interesting as the hours roll by.

As a former mobile game, Egglia's gameplay is structured in a very bite-size fashion, making it perfect for portable play and perhaps a bit odd for docked play. The basic loop consists of you running through levels that are laid out on a small hex grid, with the goal being to reach the exit on the other side. Every time you get a turn, you roll a die and can move that many spaces, but the roll applies to more than just your movement. If you're next to an enemy, the dice roll will affect how much damage you do if you choose to hit them. If you're next to a tree or something else you can harvest, you may get more yield out of interacting with it.

This randomized approach to gameplay is satisfying, but it makes for a combat system that feels a little shallow. You're able to mix things up a little bit by bringing three spirits (more on that later) which give you a few spells to use to attack or defend yourself, but the combat is otherwise completely at the mercy of RNG. Your stats may even be up to snuff for a given encounter, but a few bad rolls could be all it takes to put you in the danger zone. Combat encounters thus seem more like the outcome of statistical inevitability than the product of legitimate strategy or skill, and this can make both victories or defeats feel unearned. You don't beat an enemy because you artfully applied a strategy utilizing various skills and abilities, you do so because you grinded up your character enough and the dice rolls generally went your way. Still, it's clear that levels are designed to be fired through in a matter of minutes, and in this regard, the combat system is effective at giving you just enough resistance that a run of a level isn't monotonous. 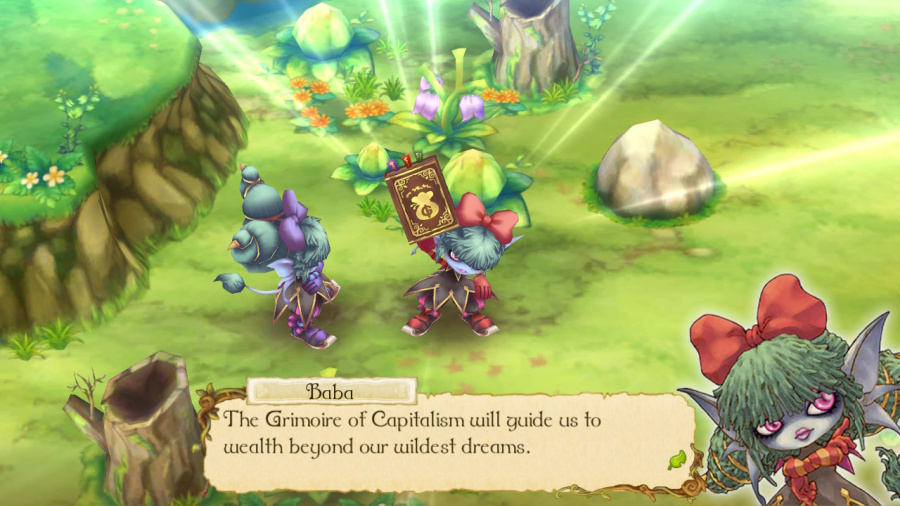 When you're not busy on a dungeon run, your town is where you'll spend the bulk of your time. This is the place where all your recruited allies congregate and can thus offer you quests and collectables to generally expand your town and deepen your relationships with everyone. An early quest, for example, sees your recently recruited friend Paru asking you to find twelve of a certain kind of log so he can build a house. If you bring him the logs, Paru builds his house and you get a nice reward of coins, materials, and a boost to your relationship with him.

The relationship aspect is especially important, as you can bring two friends with you on a dungeon run to help with material collection. Different friends will focus on collecting different things, and having a deeper relationship with them will encourage them to gather more and rarer items for when you clear the level. This is balanced, however, by each character getting 'tired' over time. If they get too tired to come with you on the next run, it'll take either a few hours of real-world time or a special rare potion to get them back into shape. You're thus incentivized to keep rotating who you bring out with you in the field or to put the game down and play something else while you wait for a critical character to rest up. 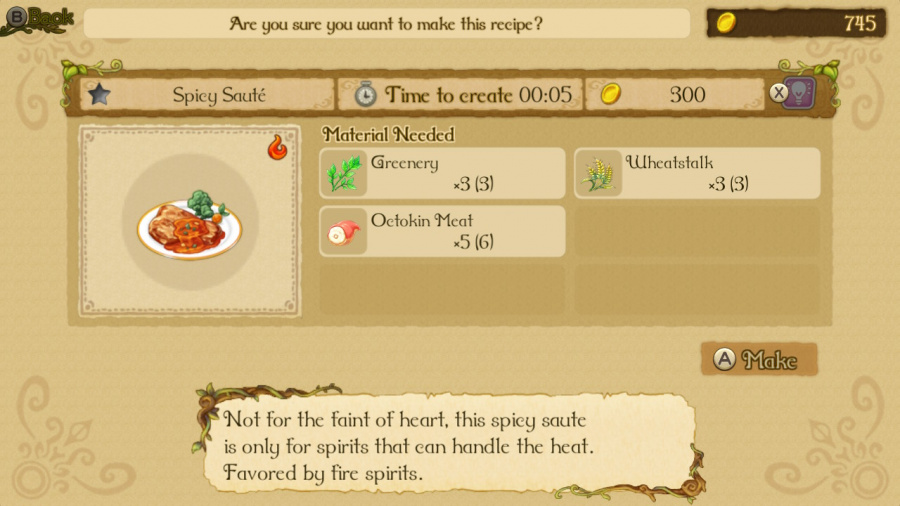 Having real-world time limitations introduces an interesting dimension to Egglia, as it effectively means you can't enjoy this game to its fullest for too long at once. It's not necessarily a bad mechanic, but it feels out of place in a console game that you may be playing on the couch for an hour or two at a time. There are ways to get around the timers with limited use items—and we haven't seen any that last more than a couple hours—but there were a few instances in the review period where we had to circle back after needing to give something time to charge. Again, it's not necessarily a mark against the gameplay, but just be aware that the root mobile game design philosophy here can feel like a weird fit for a paid Switch game.

The main thing that all the time gating is for seems to be the spirits, which act as the main 'equipment' that power up your character. Spirits come in five elemental types, and each one has either one offense spell or one defense spell that can be equipped to your character's loadout before entering a level. Spirits level up independently from your character and can even be evolved at max level into more powerful variants. However, nearly all aspect of spirits are time-gated. You summon them from a gacha-esque shrine that takes anywhere from fifteen minutes to a few hours. If you want to evolve them or feed them items to level them, you must first wait for materials you've planted to grow. 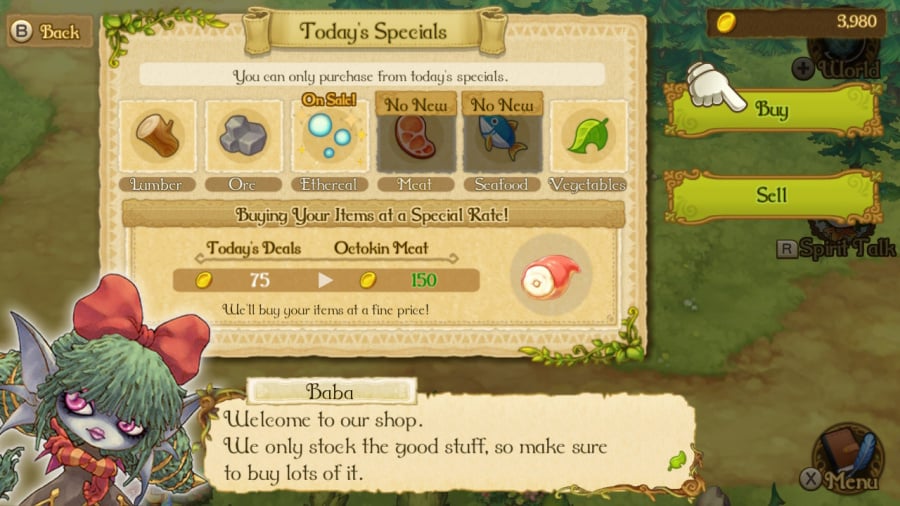 Overall, this makes the general gameplay loop of Egglia feel quite grindy, though not necessarily in a bad way. Your main experience with this game will be juggling various timers and rerunning the same levels to get materials so you can start more timers. On one hand, it can be rewarding to see your town grow over time, granting you new dialogues with friends and more options for things like furniture in your house. On the other hand, this means that Egglia doesn't prove itself to have very much mechanical depth; your experience after dozens of hours will be largely unchanged from the one you had helped an hour in; it's an ongoing pie-eating competition where the first prize is more pie. Those of you who like to see momentum or meaningful progression in an RPG will be left wanting, then, but those who enjoy a relatively mindless but pleasant grind will find plenty to love.

For presentation, Egglia mostly excels in nailing the aesthetic it's going for, often evoking the best of PS1 era JRPGs. That watercolor-esque art style imbues the simplistic environments with lots of depth and character, while the models are surprisingly sharp and detailed. It's obviously not much of a system showcase, but there's something difficult to describe about how cohesively the fairytale environments and silly characters come together to make for an alluring picture. Meanwhile, the soundtrack matches the aesthetic well with a generally playful and bouncy vibe that really sells the whimsical nature of the world of Egglia.

Don't be put off too much by its smart device origins — Egglia Rebirth is an enjoyable and charming RPG that's a delight to experience on Switch. The bite-sized levels make this one easy to pick up and play, while the ongoing barrage of new quests, friends, and levels keep giving you good reasons to come back for more. It must be said that the gameplay can feel a little shallow on extended sessions and the constant presence of timers can sometimes make it feel like a weird fit for a console. However, if you're a fan of Legend of Mana or are just looking for a light RPG that doesn't require too much mental investment, Egglia Rebirth is a solid title we can recommend.