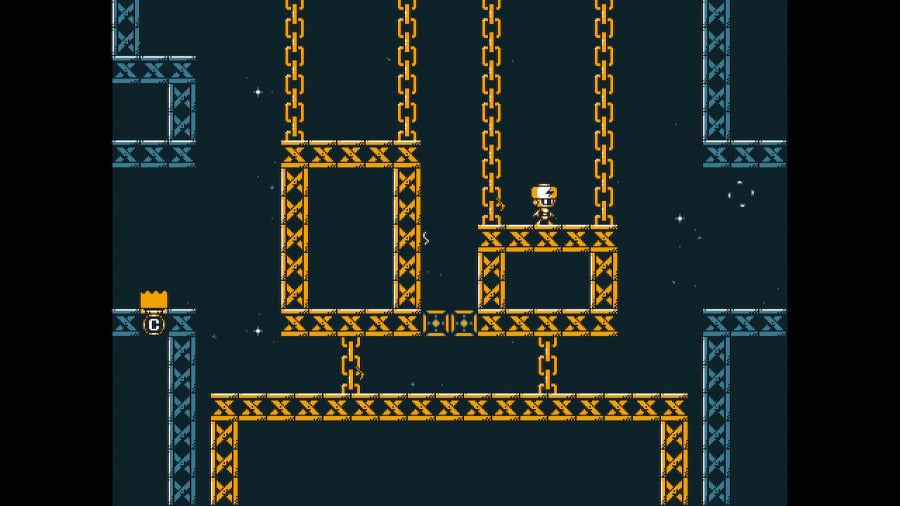 Isolation is a weird thing; we're all a little accustomed to it now, but having to figure out things on your own can be pretty daunting. Elechead revels in isolation; it was made by a sole developer, NamaTakahashi (Developer of 2019's eShop game Battalion), and during the course of the game all you have is yourself, and your head.

Elechead is a puzzle-platformer in which your character's head is a source of electricity. The beginning of the game consists of simple platforming challenges revolving around this mechanic. However, very quickly you gain the ability to throw your own head and what was a simple puzzle-platformer becomes one of the most satisfying and surprisingly deep puzzlers in recent years. Even if it doesn't stick around for long.

Now we aren't talking Baba Is You levels of mind-bending that will really fry your brain. Elechead isn't necessarily difficult. It does, however, strike an almost perfect balance of being easy enough not to be frustrating; but tricky enough to hit you with the huge satisfaction when you finally figure out the solution to a puzzle.

Where Elechead really shines is in its ability to introduce mechanics in one section, and then have you completely rethink what you know about the game the next. Puzzles can span multiple screens, making you really think outside the box (literally). Every mechanic is put to use ingeniously; even things as unassuming as the level resetting checkpoints are used in interesting ways. The game's finale perfectly exhibits this style with one of the most impressive puzzles we've seen in this style of game

If the core puzzles aren't interesting enough for you, there's also the inclusion of collectibles, which require you to rethink some parts of the game entirely. These range from new color palettes for the game, remotes — of which collecting all 20 grants you access to an alternate ending — and even new moves for your Elechead. These can be deviously hidden, while others can be in plain sight but require a thorough study of the room to acquire.

Elechead is presented in a simple two-tone style with fairly basic pixel art, but there's something very charming about the way it's presented. Your titular hero is very cute, and there are nice little animation touches, like his head sometimes going upside down depending on how you catch it. The rooms evoke a Mega Man vibe with big industrial platforms across a serene space-like background. The aforementioned hidden color palettes change things up if you get bored of the blue and orange, however, some of them (looking at you, black and white) are a bit headache-inducing.

A great chiptune soundtrack courtesy of Tsuyomi caps things off; it perfectly encapsulates that quiet, isolated feeling, while knowing the perfect time to ramp things up. While the game doesn't last long (clocking in at around two hours), it uses every second wisely and never outstays its welcome, even if you are left wanting a bit more.