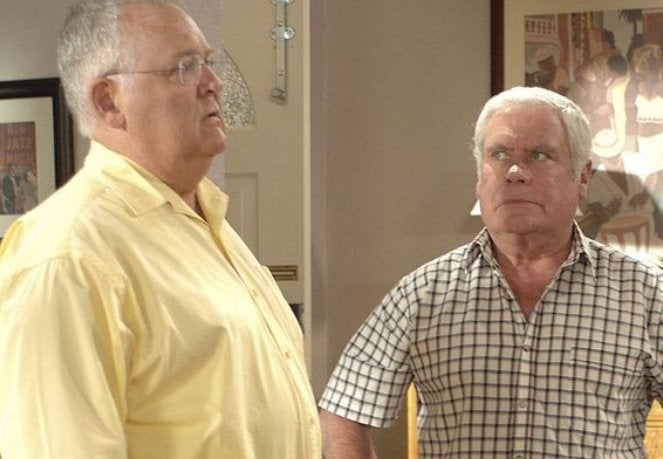 The final episode of imported Australian TV show, Neighbors airs today on channel 5 here in the UK and, considering I've haven't watched an episode in over 20 years, I'm actually surprised at how sad I am about that fact.

Neighbors was a huge part of my childhood, as it was for many other people my age, and it was always something I looked forward to watching after school and then discussing in the playground the following day. I vividly remember things like the death of Daphne after a tragic car accident (I think that might have been the first regular TV character I ever saw die) and how my primary school was abuzz with excitement for an upcoming episode that would feature the wedding of fan favorites Scott and Charlene.

One storyline in particular has stuck with me all of these years, though, and that was the time Todd Landers got addicted to the video game Ghosts 'n' Goblins.

Judging by how young Todd is in the video clip I found, this storyline probably happened sometime around 1989/1990. It played out over the space of a couple of weeks and it showed Todd's descent into video game addiction as he tried his best to get to the top of the leaderboard on Ghosts 'n' goblins so he could enter his name above someone named 'Skinner '. To do this he song to his family to get money for the local arcade and he even skived off school in order to play the game as much as possible.

This whole thread introduced the idea of ​​video game addiction to an audience that was still trying to understand what video games actually were. This is a serious subject so hats off to Neighbors. One of those audience members was my mother, incidentally, who almost banned me from gaming because of it.

Thankfully, in the end, Todd was able to overcome his addiction with the help of his adoptive brother Paul Robinson who went with him to the arcade and encouraged him to beat his high score. Once that milestone had been met, the addiction was over and the whole episode was tied up in quite a wholesome manner, which to my relief, convinced my mother that video games might not be so evil after all.

That wasn't the end of Todd's adventures with video games though. I swear I remember an episode a few years later that featured him playing Bullfrog's Magic Carpet on a brand new PC that made me very jealous, although sadly I can't find any video proof of that.

Anyway, all of this reminiscing has made me pretty excited to check out the final episode of Neighbors. With characters from my childhood like Scott, Charlene and Mike making an appearance it should be a lovely, if slightly sad, trip down memory lane as well as a fitting end to the show. One thing's for sure though is that Todd won't be making a return. Another vivid memory I have is of when he got run over by a van and subsequently died of his injuries a few days later, much to the distress of everyone at my school. Strewth!