Another limited-time event is on its way to Weird West bayou survival game Hunt: Showdown. Serpent Moon is “coming soon” to Hunt, and the short teaser released by Crytek provides a couple hints at what's in store – but a lot more questions than answers.

Serpent Moon is a follow-up to this year's first event, Traitor's Moon. During that event, players earned event points by destroying 'Orwellian effigies' scattered around the maps, and by doing normal Hunt: Showdown stuff like investigating clues, looting hunter corpses, and extracting with bounties. 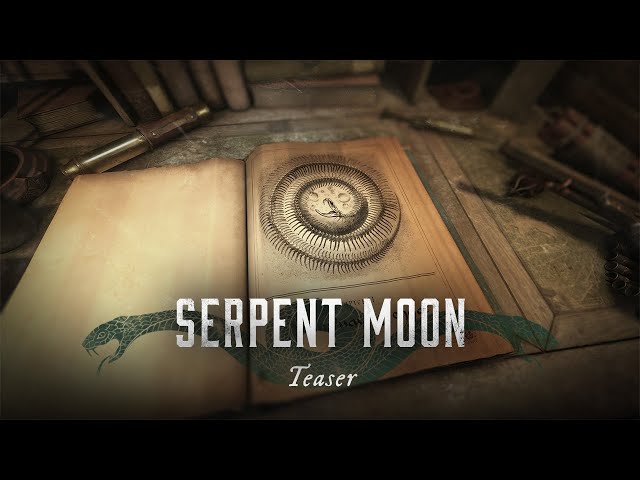 Crytek has yet to reveal what the Serpent Moon will entail, but the trailer does hint at some new gear you'll be able to take into the haunted killing fields of Louisiana when it starts. The opening shot shows what appears to be the light of a flashlight falling on shelves of books, and there are a couple quick frames cut in that show an odd-looking pistol sitting on a table.

It appears to be the cut-down pistol version of the Sparks LRR, normally a large-bore single-shot rifle that uses long ammo. The version that appears in the teaser trailer has had both the stock and barrel sawed away so it can be held and fired in one hand – although you can expect it to be noisy as hell and to kick like a mule if you do.

There's a creepy snake skeleton wrapped around the moon in the illustration shown in the book in the teaser, which is certainly suggestive of a new kind of enemy... or boss.

Crytek says the event is coming 'soon,' so stay frosty.