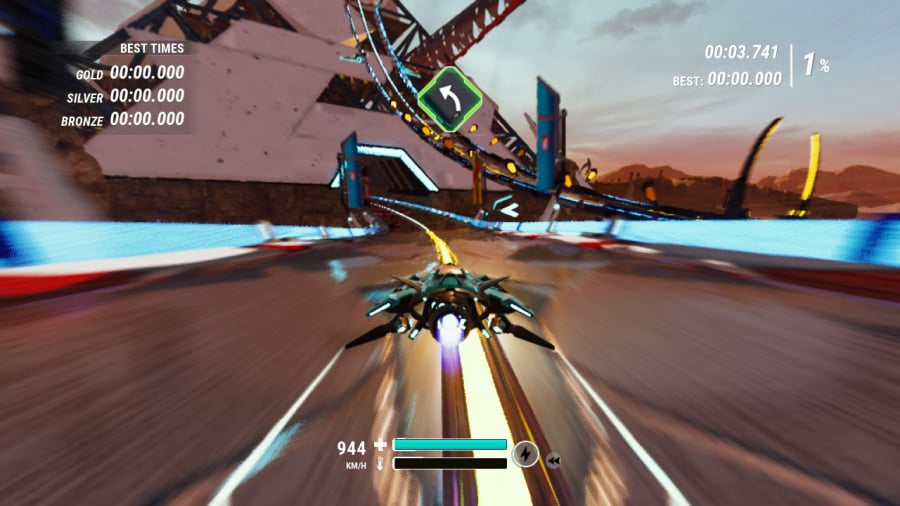 Futuristic racing games haven't had the easiest go of things over the years. It's been ten years since the last new wipeout game, and the newest F-Zero entry, F-Zero Climax, is almost old enough to buy a pint. Luckily, independent developers have been carrying that torch a bit in recent years, with games like Fast RMX filling the void left by those series. Italian studio 34BigThings' Redout 2 is another take on this formula, although weirdly, it almost feels more like a simulation racer than an arcade one.

In Redout 2 you take part in the Solar Redout Racing League, a futuristic ship racing league taking place all across the galaxy, from the heights of Mount Fuji, to the depths of Tartarus. For a racing game, this sequel to 2019's Redout has strangely in-depth lore, detailing a futuristic post-war society which has taken to anti-gravity racing as its favorite sport. Each new area and vehicle you unlock comes with a detailed lore breakdown, such as the Origin Black Hole, which takes place in the ruins of a destroyed ship that is now used as a space bin. While you aren't likely to get super invested in the plot, the worldbuilding is admirable.

Three play modes are offered. Career is set up in the vein of games like Gran Turismo in which you play through races and challenges to earn stars and eventually take part in license tests to graduate into the next tier. It's a lengthy affair with over 250 events to play through over the game's 36 tracks. Arcade allows you to pick any ship, any parts and any track to take on straight away. Finally, Online Multiplayer... which is pretty self-explanatory and currently offers unranked play. However, expect to wait a long time for games, as even finding one player took between half an hour to an hour in the days following launch; thankfully, however, you can play other modes while waiting for a game. This combined with no local multiplayer makes the multiplayer components of Redout 2 disappointing.

Luckily, the Switch version runs fairly well, with any frame rate hitches being minor and infrequent. However, the game can look a little muddy in handheld mode, with elements like the water in 'Neo-Shinagawa' looking like a giant blue wall you're about to run into. The game also has some occasional glitches like ships flying through the track, although they're infrequent.

Speed ​​is the name of the game; no matter which of Redout 2's 12 fully customizable ship types you choose, expect to be going blisteringly almost at all times. The game has a rather complex control system with triggers controlling acceleration, brakes and boosts. The left stick turns — pretty standard — but the right stick handles strafing (your left to right movement) and pitching (your vertical movements). When combined with turning, strafing enables you to take larger corners, while pitching stops your bumper scraping against the ground in loops and also prevents your ship flying off the track on large drops.

These elements make Redout 2 feel more in line with simulation racers like F1 than the arcade-style (albeit twitch) gameplay of F-Zero, making Redout 2 more satisfying the longer you stick with it. It's hard to recommend if you're looking for something to pick up and play, though, and — especially on Switch — the lack of local multiplayer is a real disappointment.