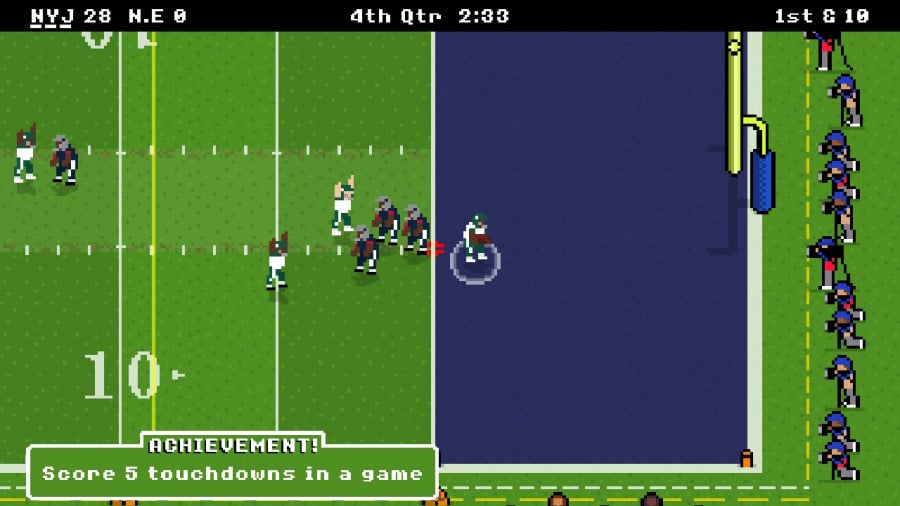 (American) Football is a surprisingly complicated sport; it may not look like it as we watch enormous humans endanger themselves while wearing a lot of padding, but it's a game with playbooks and elaborate calls that sound to the uninitiated like the outbursts of lunatics. For most of us fans it's a simple but incredibly satisfying game, with few things better than a skilled quarterback dropping back, surveying the landscape and releasing a perfect throw just as a hulk of a defender brings them down.

That's the feeling Retro Bowl shoots for, along with the classic 8-bit vibe of Tecmo Bowl on NES. Before now a popular mobile game that's gone a bit viral on TikTok, it arrives on Switch with a very modest price and having been carefully balanced for the system. The developers have spent their time well, as you wouldn't know this was previously a mobile game from playing it on Switch — and it even supports the NES and SNES Switch Online pads if you're feeling really old-school.

When you start up you can either pick your favorite team or take charge of a random side with the goal of rising to the top and earning your dream job. Going with the latter, it gave us the New York Jets, so it was eager to give us a real challenge, and we started managing our team and franchise as Head Coach / GM. This management side of the game finds a nice balance of being just deep enough that you actually want to review your roster and staff, but simple to the degree that it's not time-consuming. You only manage up to a dozen 'star' players, with the rest being fill-ins, and you also control facilities, coaches and contracts. You can dip into free agency, build through the draft or initiate trades, but it's all basic enough that we didn't mind diving into it.

At the heart of this system is a currency (coach credits) that initially feels slow to earn. You earn coins as a mix of prestige, results, and sometimes as consequences of your choices. For example, in between games you can get quizzed on your team, choose who to praise, or prioritize sucking up to ownership ahead of a team event. You're always trying to build up your coach points while keeping fans on board and players happy. It's fun and most importantly fair; with a bit of luck — and we'd like to think some smart calls — we were able to build our team through the draft along with a couple of superstar free agents. We didn't have enough money to do everything, so we had to prioritize. Much like a simplistic recreation of real life, then.

But, of course, the main event is the actual games. You only handle offense, with opposition team possessions summarized quickly with text; you still need to build up your defence, though, as our weak starting group got torched in early games. Quarters are only 1, 2 or 3 minutes depending on choice, too, so you rattle through matches. On offense you deal with field goals / add-on points and, most importantly, quarterback play. Occasionally you'll hand off to a running back, but most of the time you'll be dropping back in the pocket, trying to keep your cool and throwing a dime to a receiver. This is all done with the left stick and one button, or you can juke with a runner if you're feeling fancy. It's simple but, good grief, it's fun.

Though this is a pretend NFL, it really feels like backyard football. Playing quarterback with a few friends, spraying it around and pretending you're Patrick Mahomes. Retro Bowl captures this feel beautifully, and as our season wore on we even found ourselves taking the results seriously, as the fantasy drop-back quarterback play combined with actual play-off hopes — for the jets, madness. (We're told leaderboard support is scheduled for a post-launch update, too.)

That's the key with this game — it's addictive but most importantly simple, immersive fun. A reminder that getting hooked on a game can be due to its design rather than complexity or realism. There are a few flaws — the game has an obsession with fumbles that give you possession on your opponent's 18-yard line, and opposition coaches never seem to use time outs to help their chances. But as a game to play regularly in short bursts, or occasionally in longer sessions, Retro Bowl is a hoot. It's backyard football disguised as the NFL in 8-bit form... and that's brilliant.