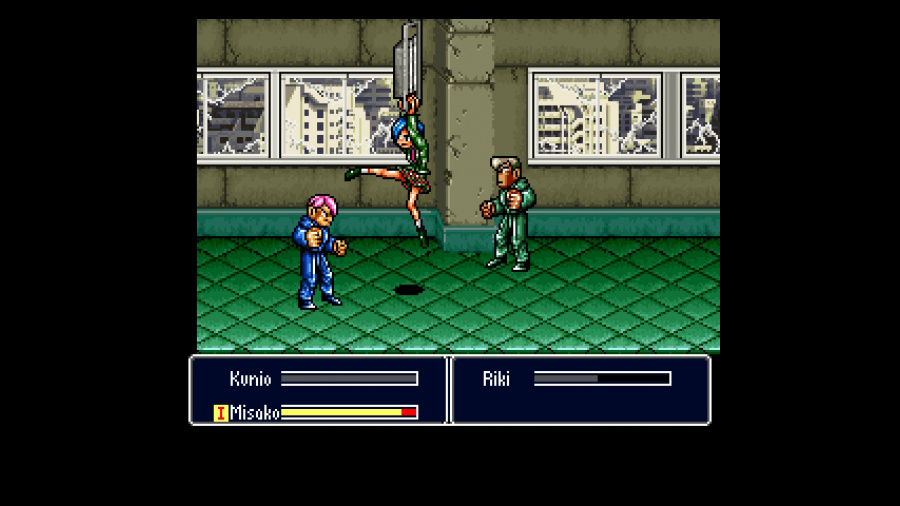 The first entry in the convoluted Kunio-kun saga, localized in 1986 as Renegade, is considered the progenitor of the scrolling beat-em-up. While later efforts would evolve its arena-based model into the classic belt-scrolling format we know today, it was Technos that established the genre's significant hallmarks: damsels in distress, bare-knuckle brawling, guys on motorbikes, 'chicks' with whips, and gun-toting final bosses.

Better-known in the West as the 'River City' series, in 2019 developer Wayforward (Shantae, Contra 4) plucked two female characters from Kunio-kun lore — the high-school girlfriends of the series' principal delinquent duo — and made them the lead characters in an all-new title: River City Girls. An attractive, well-crafted scrolling-beat-em-up, it did well enough to prompt a sequel due out later this year. In the meantime, Wayforward and Arc System Works (the latter now holding the Kunio-kun rights) have whipped up an origin story of sorts: River City Girls Zero.

It's important to note that this isn't a new game. River City Girls Zero, is, in fact, the first official localization of Shin Nekketsu Kōha: Kunio-tachi no Banka, a 1994 Super Famicom title. Among all the Kunio games, this one was significant for shifting into more serious narrative territory — its heroes framed and imprisoned for a hit-and-run murder — and introducing girls Misako and Kyoko. It was also developed by small-time outfit, Almanic, rather than Technos themselves. 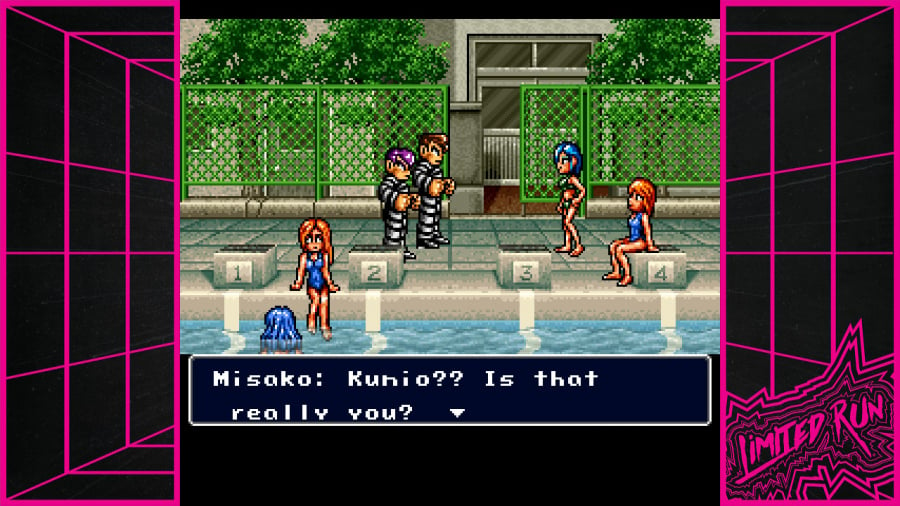 Wayforward's presentation is exceptionally good in everything except the two lackluster wallpaper options for framing the screen, unnecessarily emblazoned with the Limited Run logo. It opens with an all-new anime cutscene, beautifully animated and stylishly drawn; a cute singing soundtrack plays over the top, recounting the game's backstory and the protagonist's plight to clear their name. Firing up a new game plays a Manga panel introduction showing the girls discovering a game cartridge of their 'first adventure', amusingly breaking the fourth-wall as they attempt to wire up a Super Famicom to relive 1994. They haven't aged a day , of course.

Into the game proper and you're greeted with nice, sharp Super Famicom emulation. There are a variety of screen-size options and integer scaled displays, but, with the 16:9 distortion ruining the graphics, the default 4:3 option remains best.

It's lovely-looking, too. Kunio and pals have large, properly formed sprites (as opposed to the Super Deformed shape they regularly took) and everything is bathed in the beautiful color palette Nintendo's 16-bit console is now famous for.

River City Girls Zero is a plot-heavy title, with a lot of text exchanges. It was fan-translated for emulation several years ago, but Wayforward has sped up the text speed, which helps a lot. That said, the game can be finished in less than two hours if you can avoid dying, and perhaps just over four hours for first-time players. Local co-op is available too, allowing two friends to simultaneously batter their way across Japan. 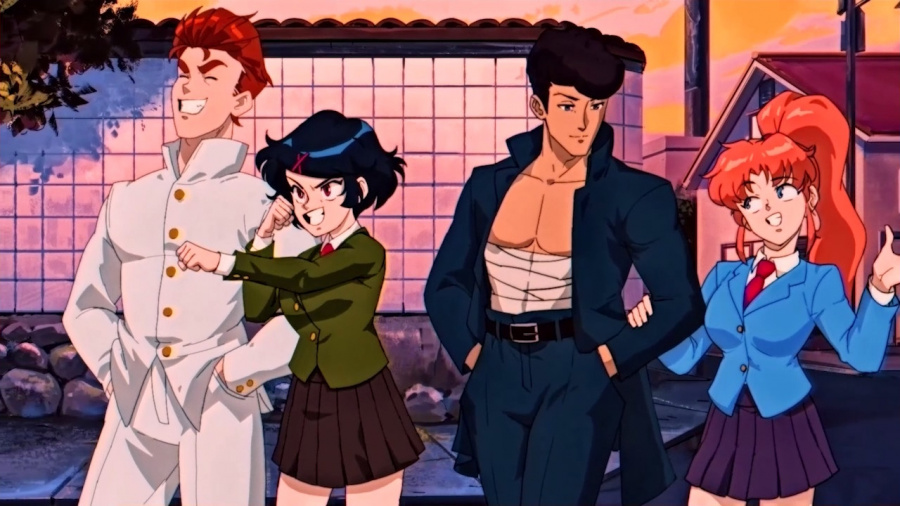 Kunio's original designer, Yoshisha Kishimoto, channeled his school-fighting and teen romance days into the character's delinquent exploits. Here, Kunio and Riki begin the game in a jailbreak, soon reunited with sassy girlfriends Misako and Kyoko. Although you can only play as one character at a time, all four teens can be cycled between by tapping the shoulder button, gracing you with four life-bars. But, if only one of your party dies, it's off to the continue screen, where you're occasionally faced with starting an entire section over.

The game's rhythm flits between a few minutes of chat — usually tough-guy talk about whipping some rival gang member's ass — and then strutting off to do just that, smacking up henchmen on the way. It's linear stuff, and simply requires you to use your resources (and all four characters) to bash your way to the next section. It's relaxing to play through, lapping up the scenery as you go, and NPC's like Takayama and his policeman dad bring levity to the proceedings. It's far from fine literature: this is about dumb kids on a rampage of revenge, but it's got charisma.

What's most important, of course, is how it plays. For some, this 1994 title might be showing a little too much age. There's nothing else in the game except street combat and several 3D motorbike interludes. The biking is a fun diversion, requiring you to slow on sharp bends to avoid careening into the barrier, and the combat bears all the hallmarks of Technos's previous titles. But, Double Dragon Advance it plainly isn't. 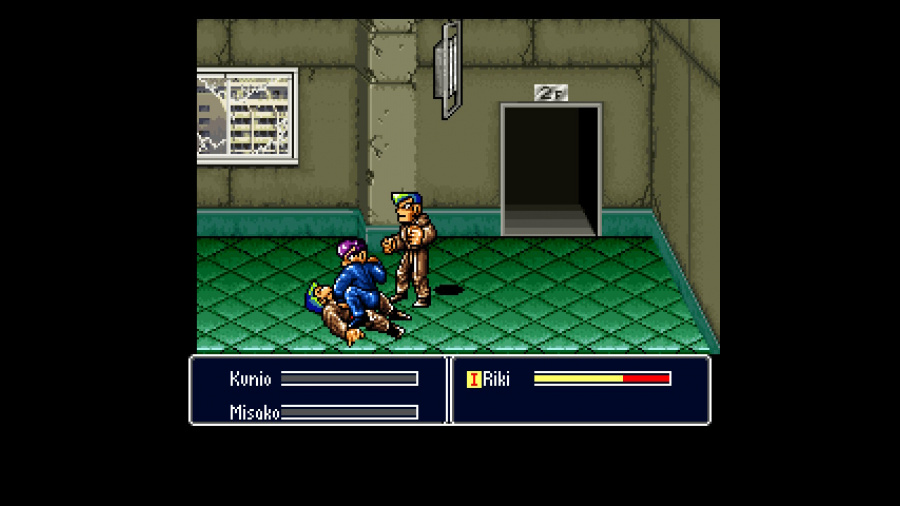 Initially, Kunio and Riki have limited move-sets until they pick up Misako, Kyoko and their high-school garb, at which point the repertoire is greatly expanded. You can punch, kick, back-attack, run, block and grab, as well as pound downed enemies. The girls can't grab or be grabbed, but they're faster, while the boys can initiate the game's most powerful and satisfying maneuver by straddling a floored thug and smashing seven shades out of him. Think Double Dragon's cathartic knee-to-gut experience, instead rendered as a series of fists demolishing a helpless face. It's great.

There are no weapons, and the overhead objects you can occasionally grab onto are pretty useless, combat-wise. You do, however, have unlimited special moves, initiated by holding block and tapping any of the four face buttons. Although visually different, most special attacks have similar effects: Riki and Kyoko spit punch-kick flurries, while Kunio and Misako tout rising Hurricane Kicks and Dragon Punches, respectively.

Everything is in the right place, but unfortunately it's a little slow and imprecise. If you're used to the snappy combat of Streets of Rage, or even River City Girls, it takes some adjustment. You need to learn how to deal with multiple enemies and various bosses by keeping them at arms length, easing in to pinch them from a vertical angle, and timing your special attacks with as much precision as you can muster. The classic Double Dragon dead zone overlap, where you're basically on top of an enemy but throwing punches at mid-air, can be irritating, and by the time you reach the docks — where enemies toughen up and appear in greater numbers — it's not unusual to get frustrated by the lack of mobility. Until you figure out guaranteed methods, like pipping enemies as they dash at you, or lay a special into them the second they get up, the stiffness and resulting restarts are a tad aggravating. Stringing attacks together — a punch, a grab, two-knees, and a skull-crushing floor-pummelling — is liberating: but it takes work, even with four life bars at your disposal. 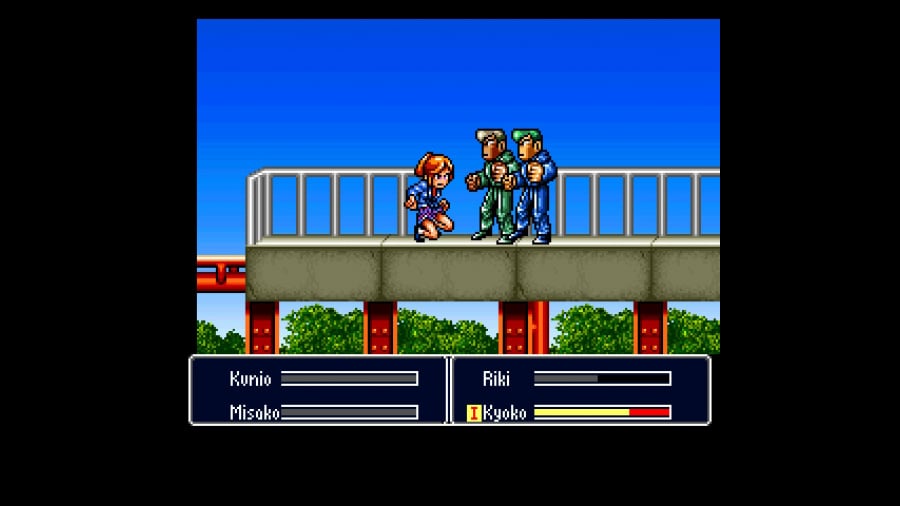 Wayforward could, and probably should, have included a revised version of the game alongside the original, thus preserving it historically while offering newcomers an upgraded, tauter combat option. That said, the difficulty is obviously engineered so that '90s kids dropping £50 on a Super Famicom cart could get a few good hours out of it. And those hours are filled with honest-to-goodness fun.