Its Saints are scrappy youngsters with caffeine addictions and student loans to pay. They're a found family of loose 20-something stereotypes, but they're bright and charming enough to pull you into their quest for self-sufficiency. There's some eye-rolling dialogue that feels almost desperate in its attempts to appeal to the Gen Z crowd, but I'm much happier to be cringing over armchair activism jokes than blatant misogyny.

And there's a somewhat relatable story that unfolds between all the chaos, too. Your character and their flatmates are sick of their poorly remunerated, dead-end jobs and are looking to strike out on their own, making use of their individual talents to form a strong collective. That just so happens to manifest as a group of part-time crooks forming a criminal empire, but even so there's a clear anti-authority slant here that's easy to get behind. 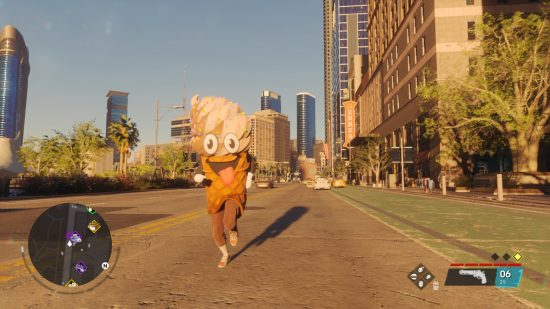 That tonal shift mostly serves to make Saints Row's iconic brand of satirical, action-packed silliness more palatable, and once you get your first taste you can't resist going back for more.

It all starts with the character creator. You can tweak pretty much every facet of your Saint, from the obvious stuff like their hair style and build proportion, right the way down to how much their veins bulge and what size their areolas are. Skin tint options run the rainbow gamut, you can give them lizard eyes, and there's a 'glossiness' slider in case you want your character to look like they just survived a head-on collision with a tanker of KY Jelly. 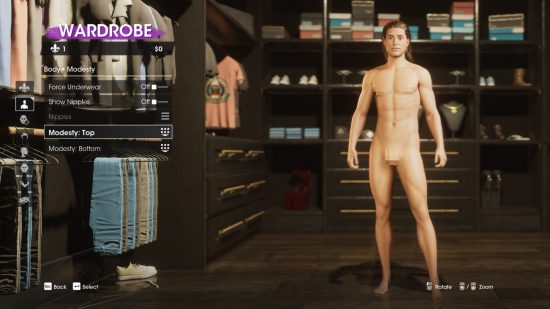 It's a daft, brilliant thing, but it only works because the gameplay and world are just as ludicrous. Among the various ventures you can embark upon across Santo Ileso, you'll find a city-wide Mad Max-inspired LARP, and a tech startup in which you get to test wallhack gadgets and stick thrusters to unwitting mercenaries before watching them jet off into low orbit. Insurance Fraud returns, challenging you to get hit by traffic as frequently and brutally as possible.

Those highlights are unfortunately matched by some truly tedious side missions. There's a series of waste disposal errands in which you carefully deliver truckloads of volatile barrels all over the map, which is somewhat tense the first time you do it, but inconceivably dull the next 12 times. 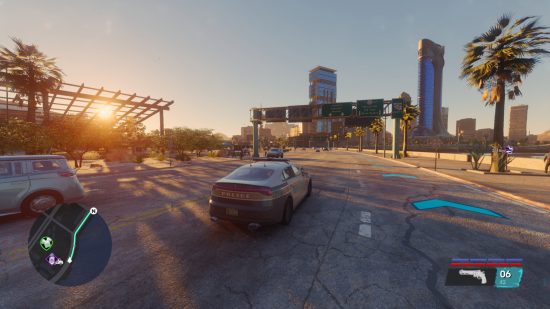 The combat and driving mechanics that make up the bulk of gameplay have been finessed during the long layover since Saints Row 4. With punchy audio, tons of recoil, and satisfyingly squishy gore combining to make successive hits feel great, but it's the addition of melee finishers and unlockable skills that tie combat together. While on-foot fights in previous Saints Row games were rote run-and-gun affairs, the reboot is impressively dynamic. You can roll out of cover, land a few shots on a nearby goon, and then execute a slick melee finisher, before sprinting over to the next baddie and using a skill like Pineapple Express, with which you sneak a live grenade onto an enemy and then toss them towards their colleagues.

Driving is also a far more polished experience than in previous Saints games. Every vehicle feels different to drive and the handbrake turn is so powerful that you can drift with pretty much any car. Slow, heavy vehicles still go fast enough that they're actually fun to use, while a new sideswipe mechanic makes slamming pursuers out of the way addictively easy - just wait for them to get alongside, hit the sideswipe button, and watch with glee as they careen off the road, sometimes exploding in a fiery ball of death. 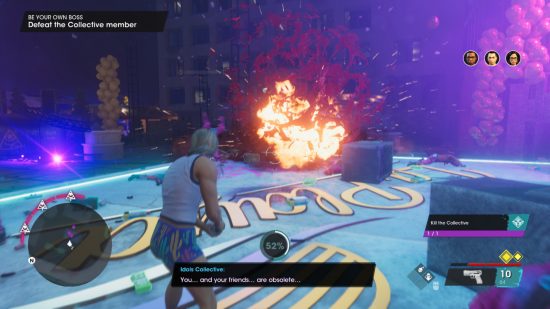 Unfortunately, the gameplay improvements are often overshadowed by questionable physics and some critical AI bugs. You can really get a feel for the weight of a truck when swinging it around a tight corner, but it only takes a slight bump in the terrain to send you bouncing up into the air and flipping like a Micro Machine. Similarly, having multiple enemies freeze mid-combat, unable to move or even fire their weapons, is a sure-fire way to pull you out of the action, especially when it happens during a climactic boss fight.

It's a similar story when you look at the revamped visuals. Animations are natural and there are some huge lighting improvements that really stand out after dark, but character models and textures severely lack detail – the Saints' pet cat is so stiff and plasticky it wouldn't look out of place in a LEGO game. 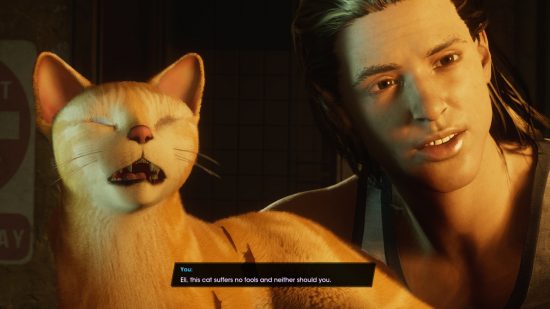 Santo Ileso itself feels a bit more fleshed out than Steelport, with easter eggs and comedy lore items scattered throughout its plazas and alleyways. It's still pretty superficial compared to other open-world games - the only buildings you can enter are clothing and gun shops, and you shouldn't expect to be swept up in a random encounters - but it's vibrant, varied, and always pleasant to look at, whether you're speeding around on a hoverboard or parkouring your way across a rooftop in search of some lost narcotics.

It's a shame that most of the main story draws you back to the same region, time and time again, because there's a lot of Santo Ileso that you'll only drive through en route to other objectives. The approximation of Vegas and Reno in the north is easily one of the coolest regions on the map, but the story will only take you there a couple of times. By the time you roll credits you'll know the area around the Saints headquarters like the back of your hand, but the rest of the map feels like a forgettable blur of repetitive side missions.

In a world of re-remasters and unsolicited remakes, this new Saints Row does an excellent, necessary job of wiping the series' slate clean. There's a dearth of unapologetically fun triple-A games out there, and if that's what you're looking for then this reboot confidently ticks that box despite its flaws.

Sometimes repetitive, sometimes eye-rolling, and sometimes just plain busted, Saints Row 2022 is far from perfect, but that doesn't stop it from being a chaotic good time.