If you love to get free games on Steam, a new Steam update has just made the process of claiming free-to-play games and free DLC add-ons a little easier. The new addition may not sound like much at first, but it makes building up that backlog pile in your Steam library much smoother, meaning you can commit to even more games that you know, in your heart of hearts, that you probably don't have time to get around to.

The new update adds a blue “Add to Library” button to free games and DLC next to the usual green “Install Game,” “Play Game,” or “Download” buttons that appeared previously. This means that you can now quickly add the free content to your Steam library without having to kick off the installation process. Previously, the method to claim free games required you to start the installation process – you could cancel the installation afterwards and the game would remain on your account, but it was nevertheless a hassle, so this is a welcome quality of life change.

Similarly, this makes picking up free DLC and add-ons for your games smoother – ordinarily, many games automatically launch when you attempt to claim free DLC. This is perhaps an even more useful change in this case, because many games such as Dying Light 2 and Monster Hunter: World that have offered numerous free add-ons split up into separate Steam store listings would launch the game every time you wanted to add one of them to your account.

PC gaming data coordinator Alejandro LL (who goes by Morwull on Twitter) highlighted the new feature, which was quickly picked up by users on the Steam subreddit. Many were quick to celebrate the announcement, while some joked about how it's taken almost twenty years of Steam to add this feature. That's not much of an exaggeration – the platform first launched in September 2003, with the first game to require it (Half-Life 2) arriving in November 2004.

Other users expressed bemusement at the positivity of the reactions, given that you could always cancel out of the installation process – but anything that makes filling up your library with those juicy free games a little easier is bound to be welcome, and the ability to quickly toss all the free add-on content for a game into your account without having to boot the game up is very welcome. 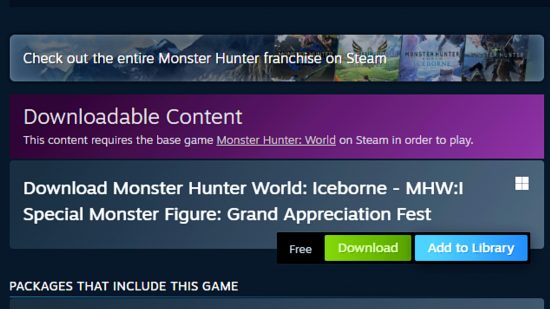 Personally, I hadn't helped claimed of the free cosmetic add-ons for Monster Hunter: World, despite spending hundreds of hours in-game, because the process was so clunky. Previously, every time you clicked “download” the game would boot up, whether you wanted it to or not. Now, with just a few clicks, all of those extra hairstyles that I'll likely never use are mine forever. After all, clogging up your Steam backlog with cheap and free goodies has been a long-standing tradition ever since the service first launched all those years ago.

If you're looking for the best way to play all your new freebies, Valve has implemented official Steam Joy-Con support for the Nintendo Switch controllers. If you prefer the PlayStation or Xbox pads, you can take advantage of the Steam controller lighting options. Meanwhile, you might have noticed a recent change to Valve's storefront as new rules come in enforcing a ban on reviews and awards in Steam game art – although when you're grabbing free games, you don't have much to lose anyway.