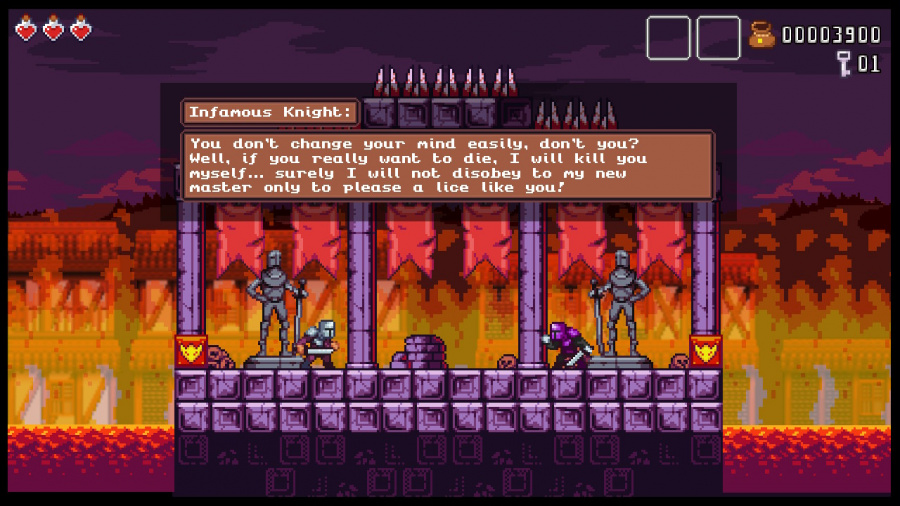 Firing up Swords & Bones, we were taken with a sudden sentimentality for the days of the bedroom coder, when newsagents held a revolving rack of Commodore or Spectrum cassette tape games emblazoned with wonderful cover art. This nostalgia smack could partly be down to the game's intro sequence illustrations looking like they've been drawn by an unskilled ten-year old; it could be because its structure feels like something from the Commodore 64 library. It's hard to say, but it's there.

This isn't programmer SEEP's first rodeo. Some of his previous titles include Thunderflash, an Ikari Warriors-style, top-down run n' gun, and scrolling beat-em-up Dragon Climax. Swords & Bones, a product of both 8 and 16-bit stimuli, is an amalgam of inspirations: A lump sum of Ghosts 'n Goblins, a pinch of Castlevania, and a dab of Shovel Knight.

It's a simple, succinct, fairly easy game that an experienced Ghosts'n Goblins player will breeze through in under two hours, and everyone else a couple more. The sprites are a touch small, but graphically it gets the job done with nice enemy designs, serviceable animation, and a decent color palette that performs well across its five gloomy worlds. Its initial setting, a town ablaze in flame, is reminiscent of the Super Nintendo's Castlevania: Dracula X, albeit without anywhere near as much bravado. 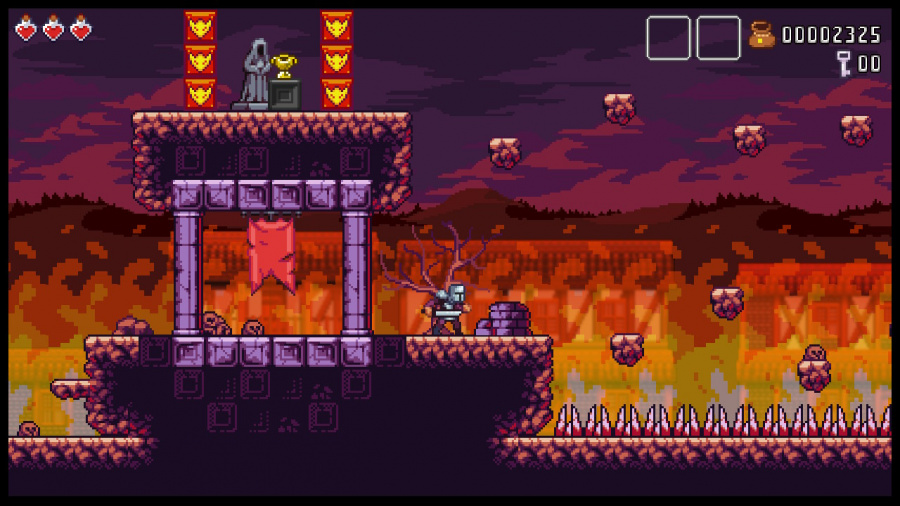 Musically, it takes a thick note out of the Ghosts'n Goblins series, and emulates it surprisingly well, achieving a suitably dour mood. The sound effects, too, are good and meaty in everything except your rather feeble-sounding sword swipe, which would have benefited from a solid pump up.

The game's structure is interesting, feeling more cassette tape than NES cartridge, somehow. Each of its five worlds is split into nine vignette-like stages and a boss fight. Although very short, each stage requires the obtaining of a trophy to be fully completed, and can be revisited in the event any are left unfound. There are 50 to collect, with the last needing purchasing from the map's shop. A complete set allows you to power up into a gold armored knight and head to the coliseum, where you carve through a special gauntlet of final stages before facing off against the true last boss.

While initially the format seems a bit simplistic, perseverance proves it's a well-thought-out adventure, becoming more inventive and challenging toward the end of world two's cursed forest. 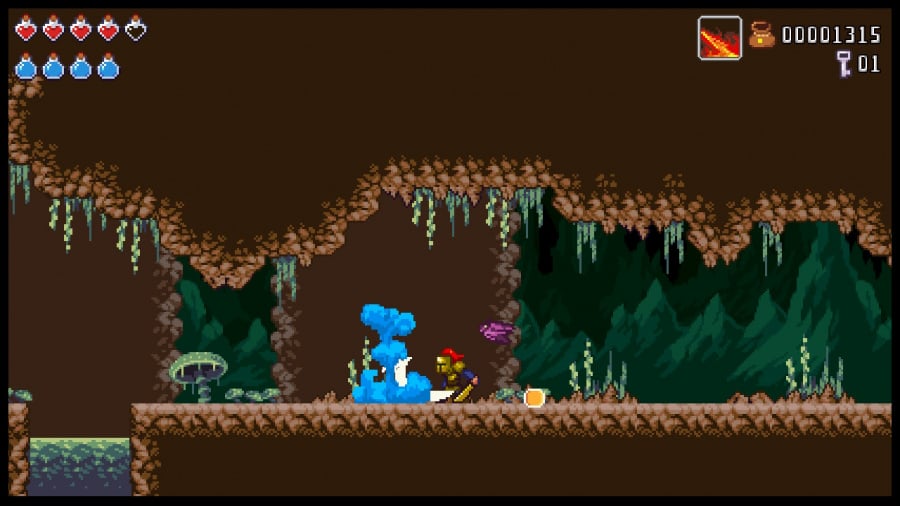 The shop — available at any time from the map screen — is integral to proceedings, holding power-ups, magic attacks, keys for chests, and HP/MP increasing trinkets. You accrue cash by slaying ghouls, slime monsters, ghosts and skeletons, amongst others, as well as opening chests and uncovering the odd concealed area. Whether oversight or intentional, the first world is a lot more cash rich than the second, meaning you can run through it several times to purchase items that reveal hidden areas, grant a double-jump, break special blocks, and bag you a handy health regenerating spell. Even if you don't like grinding, it doesn't take particularly long and speeds up your progress considerably.

All good so far? Then let's inflict a little damage and see how much scoreline energy Swords & Bones can walk away with.

Your sword actually has a lot more range than it first seems, and you can also turn mid-slash to instantly strike behind. This is particularly useful for quickly clipping, say, incoming bats on the final world's Gloomy Castle. It is rather slow to strike repeatedly, however, and seems to stick at times. When you're up against multiple aerial enemies, such as the rubber-banding zombie birds, there are times when you can't meet the required tempo for multiple incoming attacks. Additionally, it would have been nice to have some weapon power-ups in the store to make combat involving a little more rather than saddling you with one swipe for the game's duration. 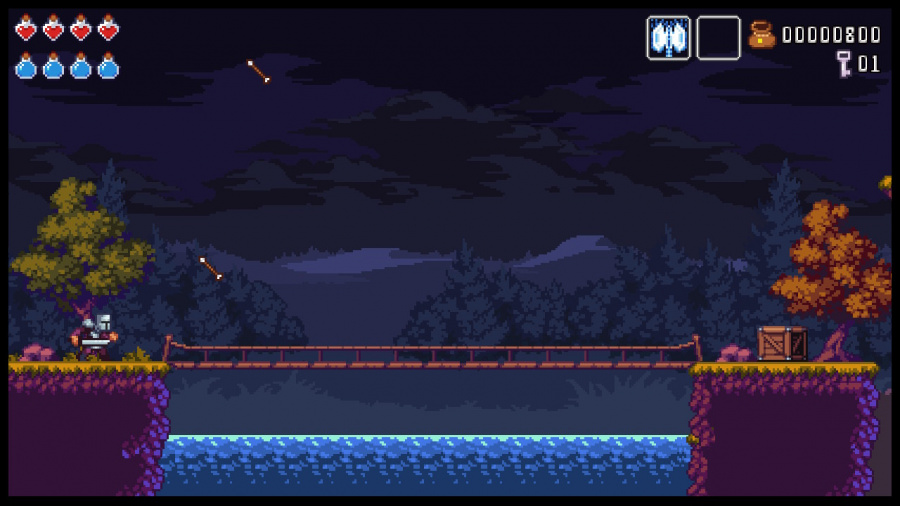 Secondary attacks are all magic-based, and you can only select one to take into a stage. It would have been nice to require certain magic attacks for besting particular quandaries, but as it is they're mostly redundant in the face of the health regeneration spell. Additionally, a button mapping option would have helped, as the magic attack is awkwardly positioned.

Pressing down will drop you through almost any platform, rather than the usual down-and-jump tandem usually present in games of this type. As it is, the down input can lead to some irritating accidental deaths, especially with the analogue stick.

Bosses are sadly somewhat flat, budget 8-bit affairs. There's no real difficulty curve involved, nor any patterns of note. The first is irritating to avoid, while the Spore Cave boss of world three has an obvious safe spot where you can just camp unmolested to the left of the platform and swipe whenever he passes. The formidable-looking final (but not really final) boss of the Gloomy Castle appears all flame and ire, but goes down in no time at all to a little ranged sword spamming. 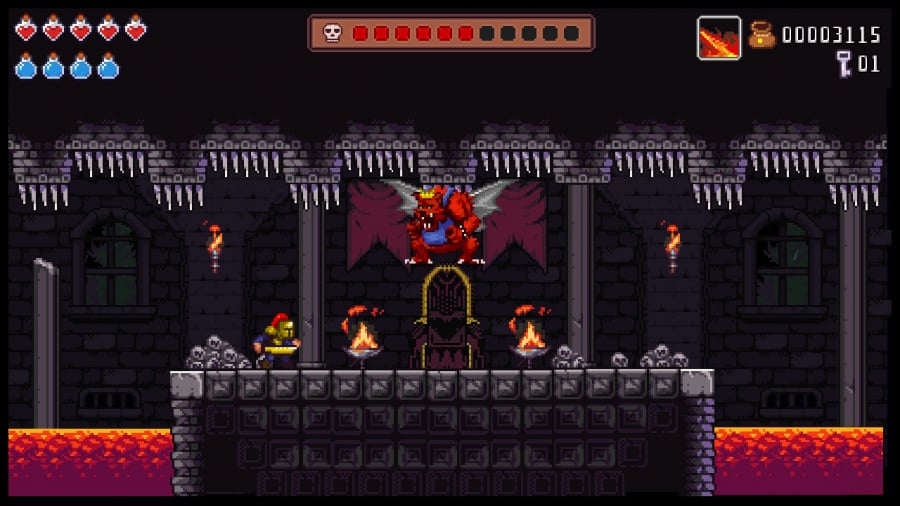 There's also an issue with damage feedback too, as, with no hit-stun or knock-backs to inform you, occasionally you don't even notice when you've lost health unless you're listening for the collision sound effect. Compounding this, there's currently a glaring bug toward the end of the game that has a large number of skeletons and flying bats either inflict damage or just pass right through you, with no indication whatsoever of which are destructible. We have been informed that there is an imminent incoming patch to fix this, but it's amazing it got through final testing.

The good news is, despite these little niggles, Swords & Bones overcomes them with well-crafted mini stages and a spirited hack-and-slash fun factor. Its worlds, offering up new visual themes and enemies, become increasingly tricky and require a little forward thinking to trounce. It's never overly taxing, but it is kept to a few curse word moments and a definite one-more-go factor. The desire to see the game through at 100% completion kicks in pretty quickly after you have all the power-ups in the bag, and, while most trophies aren't exactly difficult to locate, there are a few craftily hidden away.

Although mostly simplistic in terms of battle negotiations, the variety of enemies is deserving of praise. Overlapping attacks in later stages require you to utilize double jumps and deft reflex to reach the exit. Stage sizes, too, make this an easily digestible game for short burst intervals, allowing you to quickly tick a few off in the work bathroom toilet. That's also the first time we've used the words 'digestible' and 'toilet' in a single sentence for a game review. Achievement unlocked.

Swords & Bones needs to be approached and scored based around several key details, including whether you enjoy Ghosts'n Goblins or Castlevania-style platforming, as well as indie takes on the theme. If the answer is 'yes' to these metrics, then Swords & Bones comfortably earns its modest price tag. It has near zero replay value once completed and tied in a bow, and it's neither deep nor surprising; but it is, undoubtedly, a fun way to kill three hours with a talented gang of bedroom coders. If that sounds appealing, the negligible investment will be money well spent.