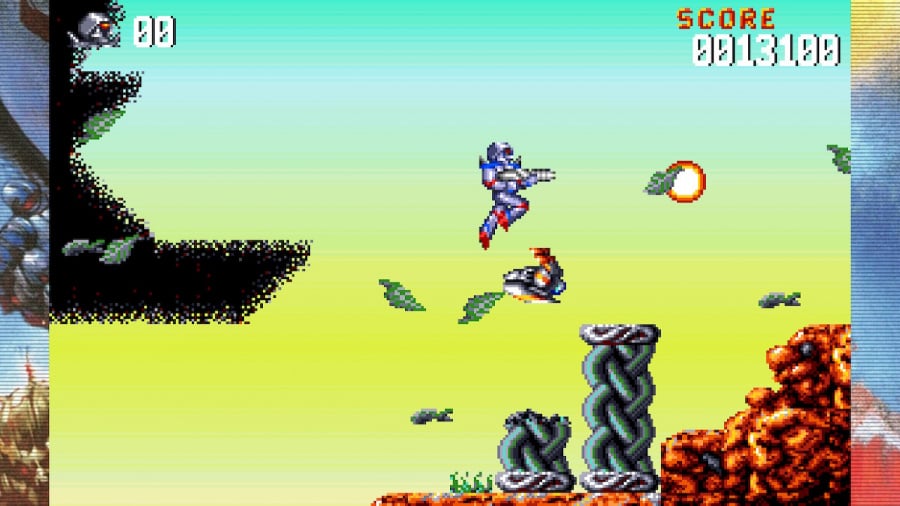 Although turrican is best remembered as an Amiga classic, it actually started life on the Commodore 64. A technically remarkable feat for the then eight-year-old home computer, it subsequently appeared on almost every system on the market.

Often compared to Konami's Contra, Turrican is a run-and-gun game with Metroid-esque elements. Its non-linear stages strongly encourage exploration, the eponymous hero decimating hordes of alien adversaries with a giant arsenal of sci-fi weaponry. Its pace and graphical swagger are famously complimented by Chris Huelsbeck's masterwork soundtrack; infinitely hummable and surprisingly cinematic, the series' stirring, cinematic 80s themes are half of what makes the series so engrossing.

The Amiga's Turrican I & II are blisteringly accurate ports, featuring huge, cavernous stages, immediate action and fantastic soundtracks. Utilizing extravagant weaponry, you traverse enemies and mini-boss-filled worlds while mining for secrets and power-ups. Turrican's broader layouts may not be to the liking of those who prefer more linear run-and-gun games, but the invested gamer will reap constant rewards. Turrican II is the superior entry, introducing the Metroid-inspired morph ball, but series fans will enjoy revisiting both for their rich sci-fi landscapes and stunning audio arrangements.

Super Turrican, rushed to release with recycled assets and considered the lesser of the 16-bit entries, is still an enjoyable console-friendly re-tooling. While more linear than the Amiga titles, its mechanics, music and speed still maintain a positive effect on the senses. In our opinion the Director's Cut is a bigger, better, and more carefully structured adventure than the original, rearranging some of the layouts, adding a new world, and restoring content originally cut due to a cost-saving reduction in cartridge size. Overall, it's a decent action experience, featuring some neat uses of the machine's Mode 7, it lacks Mega Turrican's visual detail, grappling-hook dynamism, and explosive nature.

Which makes Mega Turrican Score Attack an odd bonus for this initial volume, since Mega Turrican appears in full in Vol. 2. The aim is to barrel through a unique stage at speed, collecting items in a bid to achieve an award-winning rank. Limited as it is, it's still great fun, providing plenty of grappling hook dynamics to toy with and something for hardcore fans to master.

A bevvy of enticing extras are on-board, too, including control configurations that mimic the original layouts, concept art galleries, jukeboxes, save states, rewind functionality, and a remastered soundtrack option from Chris Huelsbeck himself. The CRT filter for emulating an old-school screen experience works well, conjuring up some heady Amiga feels.

But, best of all are the new map functions that offer full scanning and positioning with a click of the thumb-stick, revealing hidden secrets and tons of extra lives. It's a big plus for newcomers struggling with the occasionally bewildering mazes. On a personal note, we never liked the fact that the screen scroll in Turrican games begins when your sprite is two-thirds to the right. It doesn't allow much room to see what's coming up and is an unusual design choice.

That said, the only real downside to Turrican Anthology Vol. 1 is the limited selection of games on offer. This is a series currently spanning two volumes, which some will rightly see as unceremoniously enterprising. The Turrican games exist in so many formats and in so many guises, that it would have made sense to build the ultimate compilation and serve everyone at once, perhaps including obscurities like the PC Engine, original Commodore 64, or even Atari ST entries for the sake of completeness and preservation. As it stands, while a package that provides hours of gritty action gaming, its main drawback is its hefty price tag and meagre curation in respect of multiple volumes. Still, that soundtrack though.