What's it like to game on an LG OLED TV? Popular YouTube gamer Mister Flak shares his 'mind-melting' experiences > NAG

The age of gaming is upon us. Just last year there were an estimated 3.24 billion gamers across the globe, and the growth of the industry is showing no signs of slowing down. Triple-A games are getting bigger budgets while new game developers - and even entirely new game genres - are constantly emerging. At the same time, the tech enabling next-gen gaming experience is also evolving at an incredible pace.

Gamers now have more options than ever when it comes to deciding how they want to experience games. Although gamers have historically opted for monitors rather than TVs as gaming displays, manufacturers like LG have started making specifically towards gamers . So, what exactly do gamers need to know about the advantages of gaming on an OLED TV?

LG's OLED TVs outperform most gaming monitors with a blisteringly fast response time of 1 millisecond, low input lag, built-in gaming features and adaptive sync technologies, and infinite contrast levels made possible with millions of self-lit pixels. The LG 48” OLED C1 series, which earned EISA's first-ever Best Gaming TV award in 2021, has set the benchmark for gaming displays. But when it comes to gaming on OLED, seeing is believing. To get a glimpse into the experience, we've asked South African YouTuber and gaming guru, Mister Flakto put the 48” OLED C1 to the test.

The power of self-lit pixels

Unlike conventional LED TVs, OLED doesn't rely on backlighting to produce an image. Instead, OLED utilizes millions of self-lit pixels that can turn on and off on an individual level, producing the deepest blacks and infinite contrast.

So, what games did Mister Flak play, and what was the visual experience like?

“I played Forza 5, Rust, Cyberpunk 2077, Halo, Rocket League. Experiencing Forza 5's gorgeous landscapes and breakneck speeds was the most visually striking and enjoyable to me – and I'm not even a big racing fan. The contrast and color quality in darker scenes were exceptional. This is my first OLED experience, and the level of contrast blew my mind. The colors were really vivid and darker scenes were pitch black – even when I was playing in the middle of the day. I'm now convinced that OLED is hands down the best display tech on Earth. No other display tech you can find on the market today comes close.”

LG's OLED TVs boast the lowest response times on the market at an unbeatable 1 millisecond, giving gamers the responsiveness they need to react fast and feel truly immersed.

We asked Mister Flak if low response times and input lag can give gamers a competitive edge, and what this was like on the OLED.

“100%, they can give gamers a competitive edge. PC gamers have known this for years because it's one of the most important things to consider after raw FPS or your internet speed. The responsiveness on OLED was incredible. It felt just as almost as my gaming-grade PC screen. At a lightning-fast 1 millisecond response time, it's pretty much as fast as it can get." 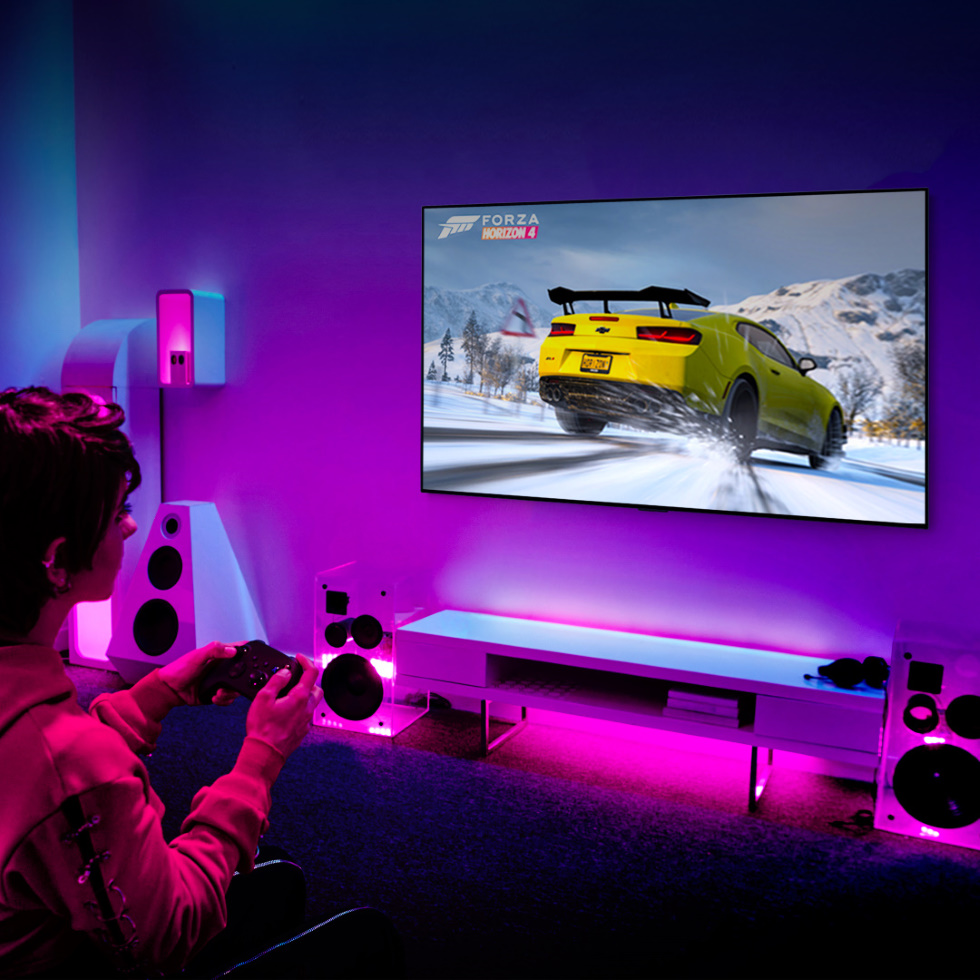 The LG OLED C1 and G1 models are the world's first TVs to support Dolby Vision HDR at 120Hz in 4K for gaming, as well as Dolby Vision IQ and Dolby Atmos. To enable 4K at 120Hz on next-gen consoles like the Xbox Series X/S, LG's OLED TVs also come standard with four HDMI 2.1 ports.

How noticeable is the difference in gaming in 4K at 120Hz?

“This was my first venture into the world of 4K. I play on my PC in 2K at 144hz, so playing on double the resolution at almost the same refresh rate was mind-melting. Now that I've seen it with my own eyes, it would be hard to go back to anything else."

More than meets the eye

Did you notice any screen tearing or stuttering on the OLED?

“Absolutely zero. NVIDIA G-SYNC is KING – and an absolute essential technology for any worthy gaming display.”

For the late-night gaming sessions

Did you have any prolonged gaming sessions? If so, did your eyes get tired?

“I played for over 10 hours, which would sometimes cause minor headaches or significant eye strain. But because of the low response time, high refresh rate, and low blue light emission, I experienced no eye fatigue whatsoever. OLED was simply a non-stop feast for the eyes.”

A new benchmark for gaming TVs

What are your overall thoughts about using the OLED as a gaming TV?

“I would consider this the only gaming TV on the planet. The built-in OS is convenient, its gaming-grade specs makes it an actual gaming screen, and its physical beauty is nothing short of art. This is probably the best screen ever made, even if I take into consideration all my fancy gaming screens.

PC gamers have known about the importance of high refresh rates and FPS for years. But the old generation of consoles could only achieve 60 FPS, so they never needed 120hz screens. Now that most have upgraded to next-gen consoles, they're mostly using older 60hz screens – so their 120 FPS consoles are only displaying at 60 FPS. People's screens are essentially bottle-necking in their gaming experience. Double the refresh rate (Hz) means double the FPS (frames per second), so 60hz screens are causing unknowing gamers to lose half of their on-screen information due to lost frames.

I'm very impressed LG took this step and made a commercial TV for gaming specifically. Console gamers only recently entered the 120hz/FPS realm and until now they had high-powered consoles – but average screens. The worst part is they don't know they need a 120hz 4K screen to properly enjoy the full capabilities of their Xbox X/S or PS5. With LG's OLED gaming TVs, this is now truly possible.”

Geared for the gaming age

LG's OLED TVs have surpassed most gaming monitors out on the market today. With self-lit pixels, low response time, low input lag, 4K at 120Hz, adaptive sync technologies, and more, it is clear to see why the 48” OLED C1 is geared specifically for the age of gaming. And now you've also heard it from a bona fide gamer, Mister Flak.

If you would like to learn more about gaming on LG's OLED TVs, visit www.lg.com/za/oled-tvs/2021/gaming.